Read stories from the road…

Stories from the Road was born out of a mapping technique called Geo-Referencing. According to the US Geological Survey, that means relating the internal coordinate system of a digital map or aerial photo to a ground system of geographic coordinates. “A geo-referenced digital map or image has been tied to a known Earth coordinate system, so users can determine where every point on the map or aerial photo is located on the Earth’s surface.”

In regular-speak, Geo-Referencing is a computerized mapping task. Here’s how it worked, specifically in reference to Township 5 North, Range 5 West (T5NR5W), otherwise known as the Bradley Township: First, I had to discover newly available land surveys made public by the US Bureau of Land Management’s General Land Office Records. Those included the 1871 survey plats of the Chickasaw Nation. Then, I imported a township and range grid into Google Earth Pro. I marked the Bradley post office on my map as a landmark. After that, I downloaded the 1871 T5NR5W survey plat from the General Land Office website.

The General Land Office records are available for download only in JPEG 2000 format. That particular image compression technology has its own website, which defines it as “an image coding system that uses state-of-the-art compression techniques based on wavelet technology offering an extremely high level of scalability and accessibility.”

Using Adobe Photoshop, I converted the T5NR5W JPEG-2000 image to a more common format and precision-cropped the resulting image to maintain its aspect ratio. As defined in Cadastral public land surveys, a township is a square area of land measuring six miles on each side. Townships are divided into 36 sections, each one mile per side and encompassing 640 acres.

Once the ratio task was accomplished, I overlaid the prepared image of the 1871 survey of T5NR5W onto the township and range grid in Google Earth Pro. I added another map overlay, this one showing the current paths of waterways in the area. Poof! Suddenly I could see an 1871 view of Bradley with modern landmarks underneath. My view of our world was forever changed!

The first image shows a modern satellite view of Bradley without the 1871 overlay. A few of the landmarks, including the 1871 route of the Fort Cobb Trail and the 1898 road through the area are marked. The second image shows the same view with 1871 landmarks visible.

Stories from the Road contains 103 maps and graphics. Many of them are geo-referenced images lifted from the 1871 and 1898 Chickasaw land surveys that have never been seen before! 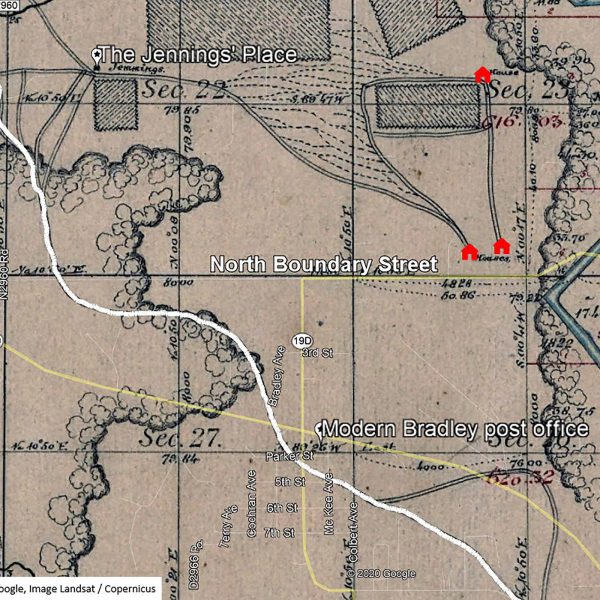 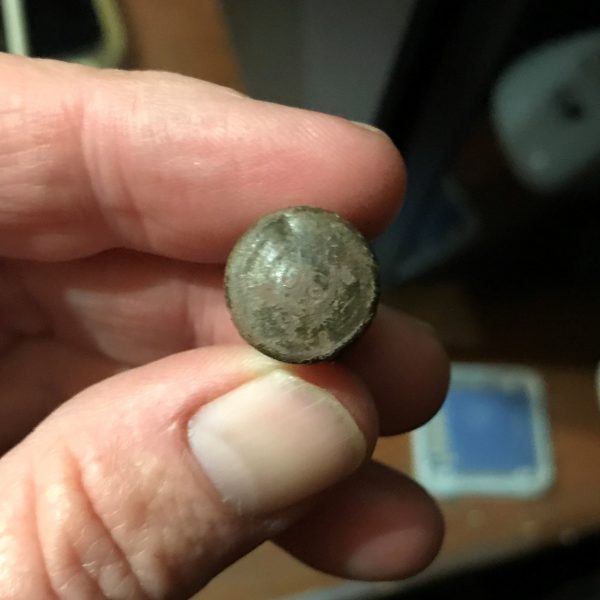 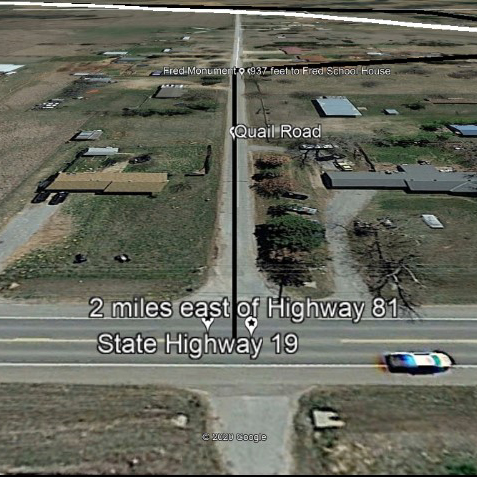 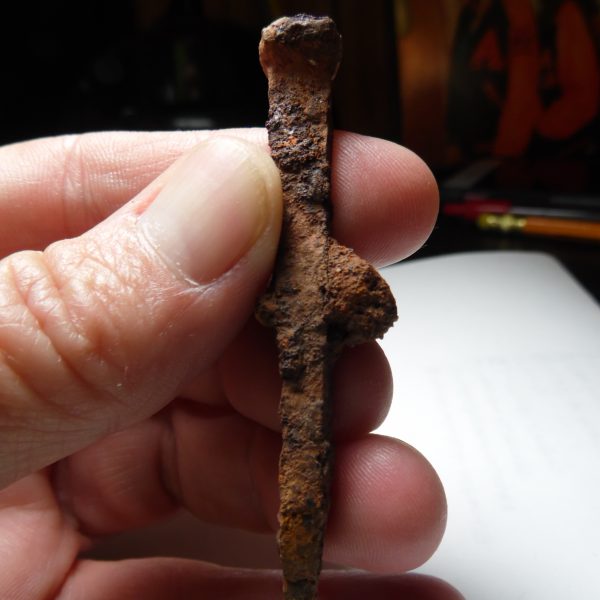 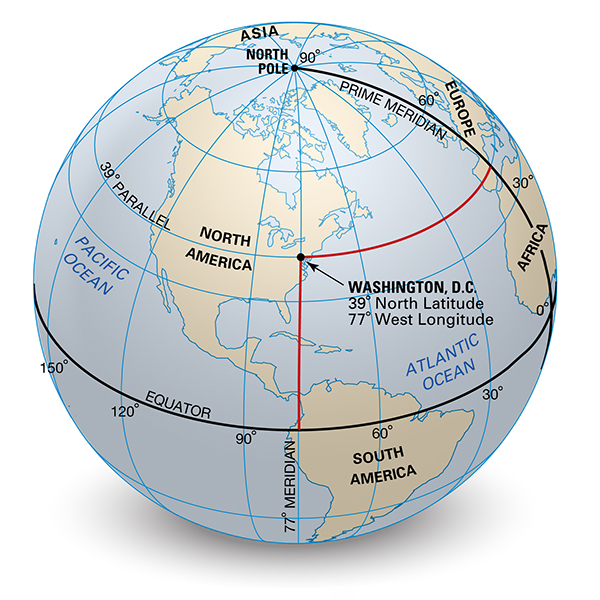 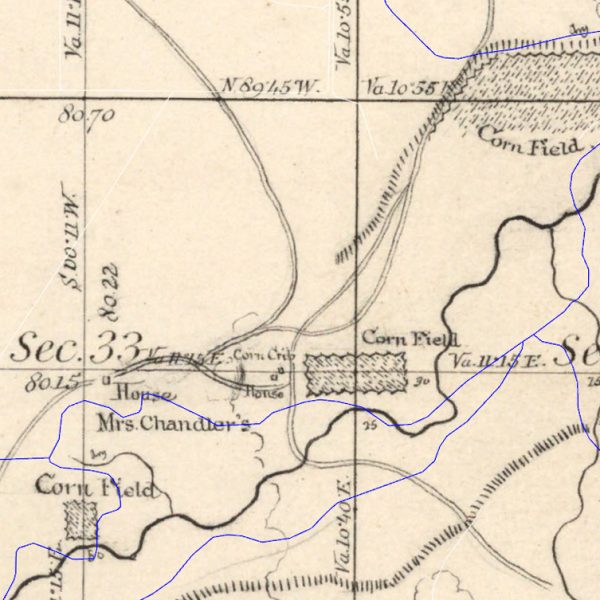 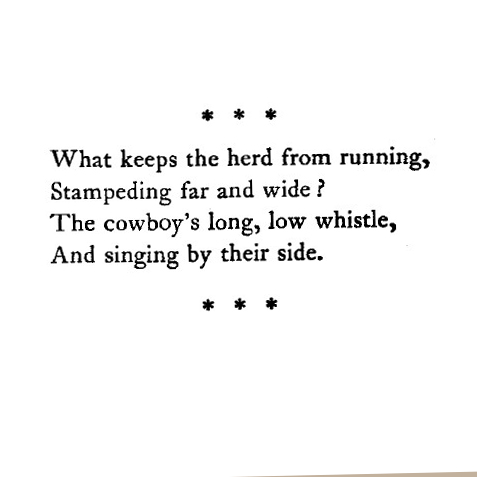 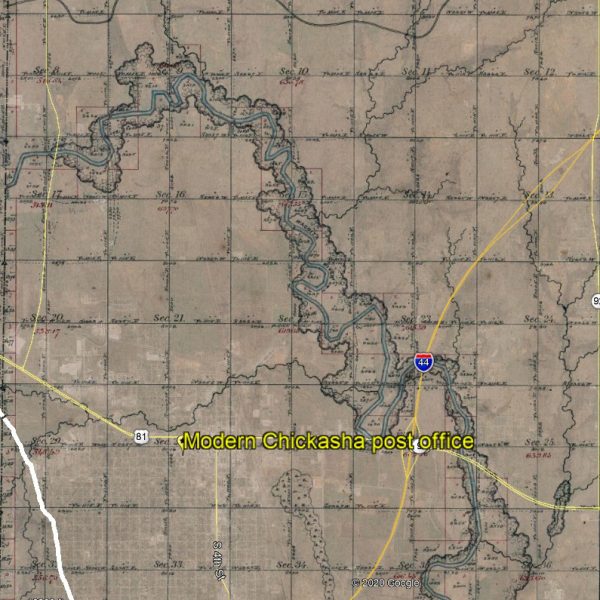 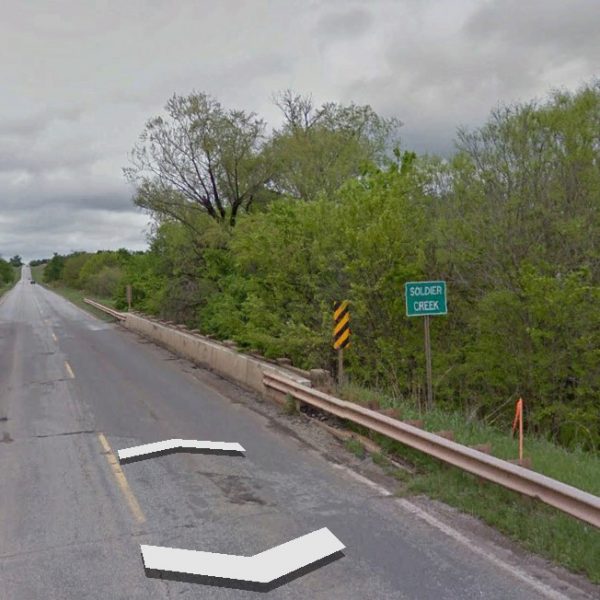 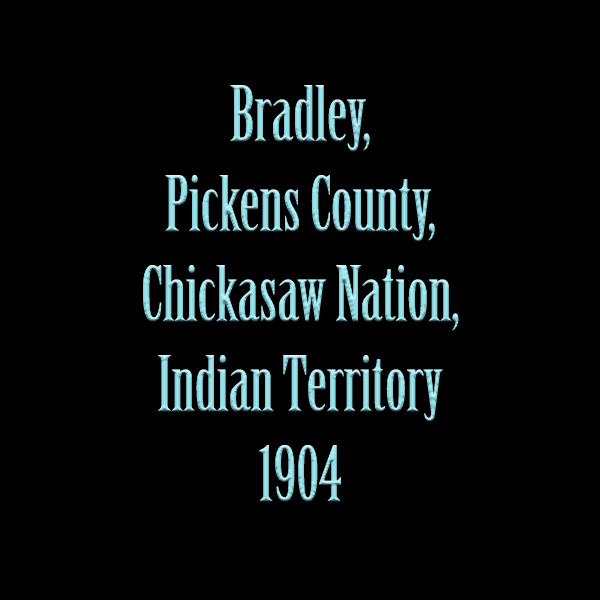